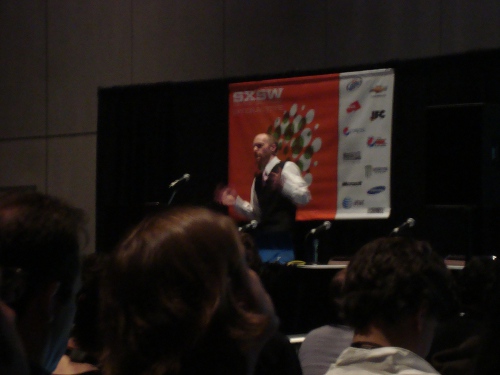 First up I hit up a workshop about BigData and PHP. Some of the luminaries of the talk included the Mozilla lady that wrote the PHP and MySQL Web Development book I own. The focus for the talk regarded strategies to employ when dealing with BigData. BigData are either large chunks of data, large amount of miniscule data, or tons of processing for data in a short amount of time. The CAP theory made its presence known as well.

The next couple of talks I’ll group together. In Mobile Opportunites for the Entrepeneurs in 2011 talked about how developers can build more useful tools for mobile technology. The Future of Mobile Gaming/Entertainment had the Angry Birds guy there talking about how awesome the game was and how it was a crap shoot to begin with. He also stated that mobile gaming needed to be taken seriously, with his game getting almost 2% of the total yearly US viewing average compared to television. Lastly, it was Designing for Mobile Web and it had another Sencha Touch representative there. I’m going to use Sencha Touch with PhoneGap real, real soon.

The last talk of the day was fantastic. OAuth, OpenID, Facebook Connect: Authentication Design Best Practices was more than what I expected. The speaker went though the session pointing out some historical and current issues with authentication and privacy surrounding it. The gist of the talk was, you need to be conservative with the data that you collect so you don’t make it feel creepy. Also, please make the login process as simple as possible.

The night time was alright. My girlfriend and I hit up the Wired Happy Hour, which I won a lot of schwag at last year. Unfortunately I didn’t win anything this time but I did enjoy Texas’ own Lone Star beer. After that, it was time to go the GDGT party and I have to say it kind of stunk. The schwag was drool-worthy and I did get a chance to play with the Motorola Zoom, the line was terrible and inside was too packed for music. So after that, we just hot-footed it to Zen Steakhouse for some tasty Japanese fair.

So that’s the quick run down for day 4. I purposefully did not go into detail because I will be talking about each topic on its own after I recover. In the meantime, I’ve got one more Interactive day to gush about. Look for that tomorrow. Now on to some Irish craziness!