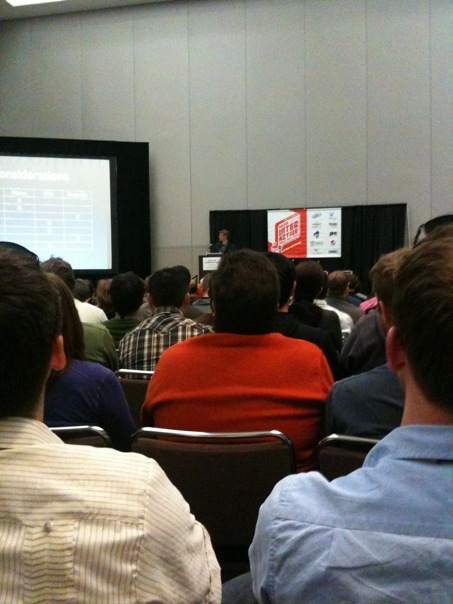 First off, we are very proud that we actually made a 9:30 session.  Due to the schedule plus daylight savings and such, we ended up missing some of the opening day panels.  The first one saw me hit up Jake Marsh, a developer that did ShopSavvy, talk about porting your mobile applications across multiple platforms.  With a comic book analogy, he described the plusses and minuses of each mobile platform.  What I came away with on this panel was that if you want to do multi-platform development then you should build for each platform instead of one consistent code base.   It will be much quicker to start from scratch as well.  Since each platform has its own UI style, you gotta build toward it.

The next panel say Dries Buytaert, the founder of the CMS Drupal, talk about how awesome Drupal was.  Seriously, half of the talk went over how lame it was to build content for the web.  The other half was Buytaert telling us that Drupal solves all of the problems.  I’ve rolled out Drupal to multiple clients.  I know how awesome it is.  I really didn’t need examples of other site usage.  Someone did ask about Drupal 7 and it seems to improve on much of the drawbacks of Drupal.  We’re talking usability, multiple database support, and other things.

I skipped over to the Courtyard next to hear a talk about open sourcing consulting models.  What I expected was strategy in selling open source to your clients.  What I got was strategy into open sourcing more than just your software.  Internal processes, hourly rates, and other items were talked about by Alexandra Samuel and how it helped their consulting company.   It was really engaging to think about open sourcing processes and focusing on execution.  Plus, due to the group talk nature of the panel, I got to hear how some consultants charge with open source software anyway. 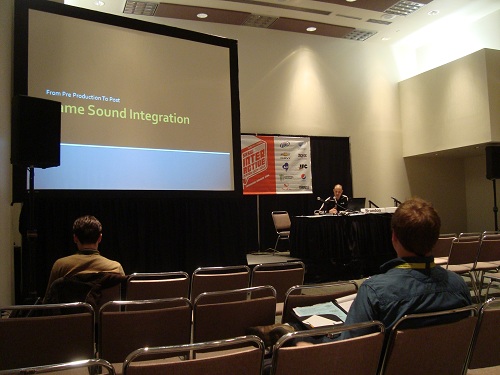 Monday’s keynote with Ev Williams of Twitter did not seem so exciting to me, so I skipped it.  I headed upstairs to hear a talk about pre and post production for game audio.  I have not been exposed to anything in the video game industry so this was my first stab.  I have a bunch of music software and to hear Alexandar Brandon talk about the latest game engines and process to mirror the game dev side of things was pretty cool.  He even suggest use source code control for audio files to help.  Apparently I need to check out Real Time Mixing for games as well too.

Next up saw an Objective-C crash course and demo.  I am not an iPhone developer so I had no clue how complicated the syntax was for iPhone development.  Joris Verbogt blew through some basic information on Objective-C as a language.   He went through it pretty fast and I’m fairly sure I got all of it down.  Then Verbogt showed off a demo.  After all of information and demoing, I still am unsure just how to develop for the iPhone.  Well, plus I need a Mac to do it.  The last panel of the day helped contrast between this and what I can do in terms of development.

The last panel of the day was a real treat.  Jonathan Stark of Stark Consulting went through a process that web developers could use to built almost native-like apps for the iPhone.  Stark first demoed jqTouch, which is a jQuery library designed to emulated the browsing behavior of the iPhone.  What does that mean?  It means the transitions, buttons, and animations on the iPhone can be used on a web browser.  Next up he talked about PhoneGap.  PhoneGap is a library of code used to setup an encapsulated web server as a native app.  You can drop your web code into an exposed www directory and build natives apps with only web technology.  Many oohs and ahhs from this one.  It was fantastic. 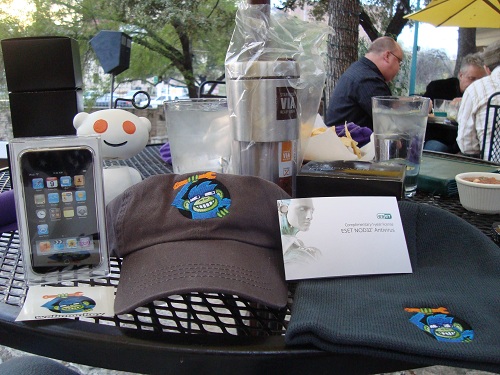 So after all of that, there was still some more stuff to do.  I popped into the Wired Magazine’s mixer afterward to meet up with my girlfried.  There we had a nice conversation with a guy from the Nonprofit Technology Network.  He definately out does me in terms of passion.  Oh, I also won a pretty sweet schwag bag there.  I got a bunch of clothing stuff and an iPod Touch!  Looks like the schwag bucket will pay for the trip.  After a quick bite at Serrano’s we headed to one of the must do parties for SXSW.

My girlfriend and I love the Found Footage Festival and when we heard they were throwing a party at SXSW, we were instantly sold.  So we headed out to Club Deville to be first in line for the festivities.  We met Nick and Joe there and even got their autographs on a crappy video they did!  They had a hard time setting up the projector for the rocks outside, but the rain that started pouring stopped that and pushed us indoors.  We stuck around for most of the party and headed back.  Nick and Joe were great in person and we’re stoked about seeing them again in Lawrence. 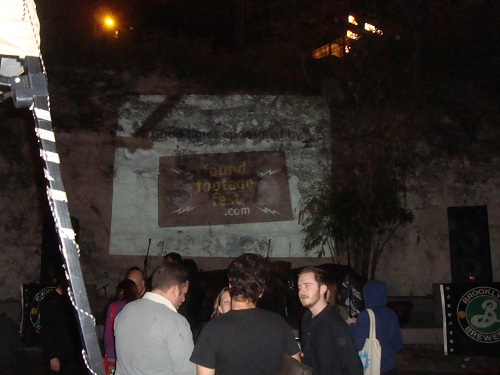 The fourth day of SXSW was by far the best one so far.  I learned so much in new technology trends and techniques.  The fill of schwag is over capacity.  We actually got into parties and met one of our heroes in bad movie comedy.   This day reminded me just how awesome life can get.  Everything that I identify with in terms of life and career converges here in Austin.  It’s not even half over and it’s totally worth it.