Okay Day 3 is over and as I’m drying off from the quick hot tub dunkin’, I’ll blast off another recap for ya.  Today saw a crazy start with the time change.  Once we finally got into the sessions, we got back on track, even though some of the panels were disappointing.  The SXSW Block Party helped pick things back up real fast.  Tonight I finally decided that the film portion of SXSW just isn’t all that cracked up to be.  More discovery on another day of SXSW, here we go!

I set the alarm early so we could make the first session.  The phone went off and we got up.  For some reason, the clock in the hotel room was off an hour.  Yeah, we forgot it was Daylight Savings.  So we automatically assumed that we were actually an hour behind becuase the cell phones were off.  We got dressed and rushed the Adobe Sunday Brunch.  The crowd was light and my girlfriend and I scored some hot eggs and about 4 shirts a piece.  Once we sat down, we realized that we were actually on time and could make the first 9:30 am.  Wah wahhh.  At least we got the free schwag before everyone else.

The first session of the day for me was JavaScript Architecture:  The Front and Back of It.  Kyle Simpson led a talk that revolved around a major issue with MVC style coding and then offered up a JavaScript solution to handle.  The gist of the problem was that the ‘View’ portion of MVC development was severely lacking in terms of consistency, maintainability, and flexibilty.  So Simpson suggested something he coined CVC or Clients View Controllers, where the ‘View’ and ‘Controller’ part of the code was all JavaScript (using JSON) and the same for both client and server machines.  He then went on and demonstrated a JavaScript server and webserver.  All in all, this talk was great for me and helped me think about ways to implement JavaScript and build off my somewhat limited knowledge of MVC. 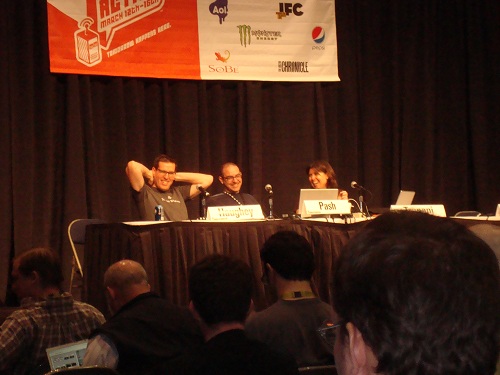 The next session was somewhat disappointing.  When hearing that Gina Trapani, of Lifehacker and This Week in Google fame, was part of the Coding for Pleasure: Developing Killer Spare-Time Apps panel at SXSW, the panel moved to my must see.  When I sat through the first 1/2 hour, however, I felt like my expectations weren’t close to being met and bailed.  Trapani, along with Adam Pash and Matt Haughey, ended up talking about a couple of apps they built and how you need to code for fun and non-profit.  Granted their fun apps ended up growing big.  Much of what they talked about I already knew about in terms of motivation, passion, and inspiration.  What I was looking for was a best practices or tips session and I all I got was them talking about thier apps.  The movie poster display for the Film portion of SXSW did a good job filling things in.

In what was one of the more entertaining sessions of SXSW, Bruce Lawson and Martin Kliehm dug down deep and pulled out all of the stops in terms of what HTML 5 is and how it will affect is in the near and long term future.  Lawson started first and his drama-major background really shone through in his presentation style.  He talked about how backward compatible HTML 5 is, showed how all of the major vendors are implementing it, then showed all of the cool portions of HTML 5 that Opera 10.5 implemented.  We saw video, form validation, input form fields improvements, and some tasty canvas applications.

Next up, Martin Kliehm talkd about new techniques for browsers and some HTML5 API implementations.  Kliehm showed off mutli touch and its uses in the browser.  You can really use all of your digits to move images.   He then demoed orientation and browser use.  This means that in supported computers when turned around, orientates the browser and its contents stays static or pointing up.  After the oohs and ahs, we saw some APIs including file I/O that plug into the browser and allow it to become more of an OS than a web browser.  This panel blew my mind and I’m coming away with fresh inspiration and motiviation to get to work on HTML 5 technology. 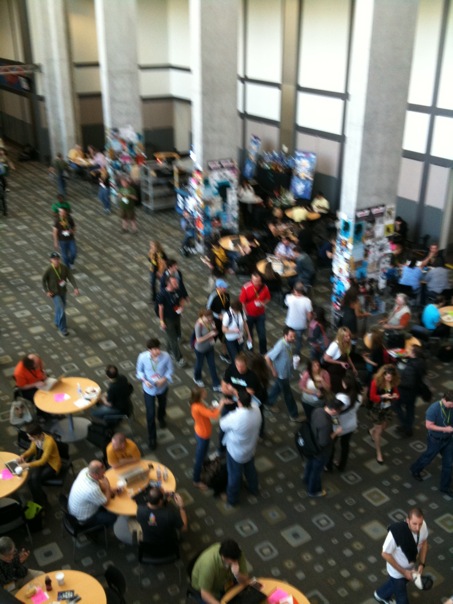 After the kick ass HTML 5 session, the rest of the official day was rather fluid.  The CouchDB guys talked about how crappy the tech book publishing industry is more than selling their book about CouchDB.  The SXSW Block Party saw loads of booze and much more schwag to add to the bucket.  I also had an opportunity to talk to the Pop Box guys and now I’m leaning more on to getting one of these suckers instead of rolling my own home theater internet streaming device.  It’s a good thing the Block Party closed at 6, because I was getting lit pretty hard.

What better way to take care of a massive buzz?  Walk 2 miles to a SXSW Film event!  We tried to hit up the Saturday Night premiere but like all of our other previous film attempts, it was overbooked and we couldn’t get in.  The consolation was a movie called War Don Don that put me to sleep.  I’m going to go on a limb and say that theilm portion of SXSW is overrated and that it seems to be the most pointless part of the entire experience.  It’s a good thing Maudie’s Tex Mex consoled our souls and bellies after the show.

We cabbed it back after that and called it an early night.  We needed some rest and hot tubbing before the big day and night we have planned for tomorrow.  Today was just a bit more roller coaster like, but I’m still coming away impressed with all of the information blowing around in Austin for the conference.  The discovery keeps trucking and we aren’t stopping for nobody.  Watch out too, but we are kicking it into high gear, right now!