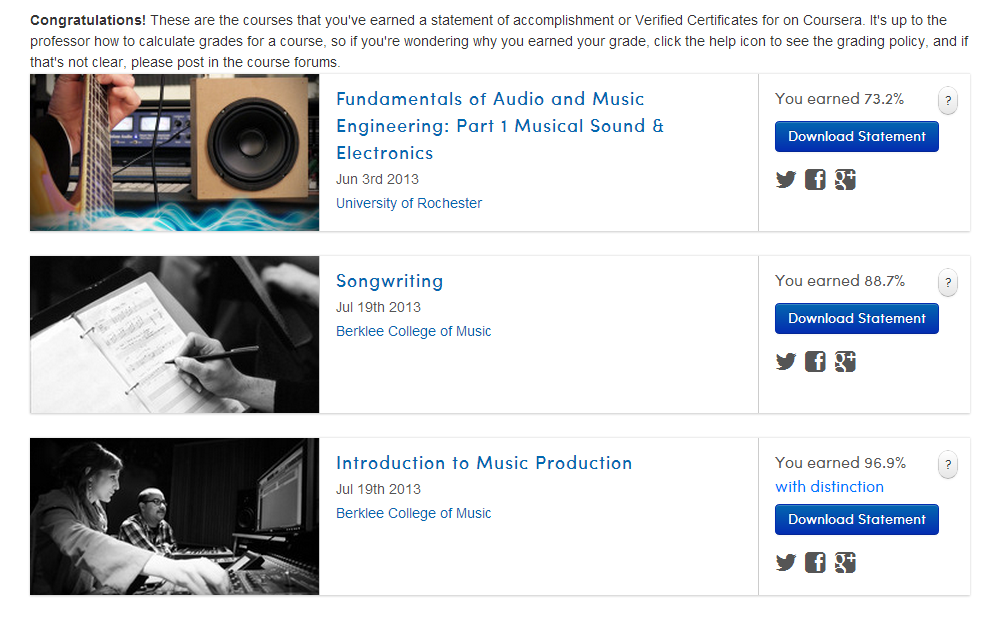 The idea of Massive Open Online Courses was a faint one to me coming into this year.  I do what I normally do and if something looks interesting and it’s easy to sign up for, I go for it.  So when I signed up for Coursera, I didn’t expect to get the kind of benefit I got from it now I’m three courses in with them.  It took an interest in electronics to get me started and I don’t know when I’m going to stop.

When Coursera came out with some new classes earlier this year, I took the opportunity to sign up.  I browsed the courses a bit and didn’t see anything spectacular.  I got email later on with new courses and the Fundamentals of Audio and Music Engineering: Part I Musical Sound & Electronics caught my eye.  So I enrolled and kicked of my journey.  This was June 3rd.  While I was there I notices both the Songwriting class and the Introduction Into Music Production class.  So I enrolled for those guys as well because it started right after the Audio and Music class.

So let me start there.  I didn’t think it would be as challenging as it ended up being.  It was the teacher’s first foray into MOOCs and it showed.  I give them the credit for trying to squeeze the basics of circuit analysis and the physics of sound.  The goal was to be able to understand how sound works through electronics.  I even ordered the amplifier kit they showed off during the course.  But I believe the undersold the amount of background truly needed.

They mentioned some high school algebra and trigonometry as background for the course.  Really, you needed at least calculus and a greater understanding of trigonometry.  The math was the hardest part.  The notes were kind of off and the responsiveness of the teachers left me wanting more, but my main issue was that I had to spend double the time outside to get caught up.  I did well enough to pass and it did help to identify gaps of my knowledge if I wanted to pursue this kind of hobby.  I wasn’t alone, however, in my struggles and the levels of expertise that classmates had in this course (great to very small) left the discussion forums as a fairly volatile place.

It was a tough first ever course and I almost stopped after I completed it.  But I forged on to the Songwriting and Introduction to Music Production classes, as they were going on at the same time.  This was much more professional.  It’s mainly because the Berklee College of Music has been doing this online education stuff already and the switch offer a MOOC was rather painless for them.  I had great fun and learned alot taking both courses.

The songwriting class was a treat because it was something completely foreign to me and the instructor made it fun.  The six week course allowed for gaps of knowledge but presented a finite number of progressive steps to build a songwriting tool set.  The challenge here was the peer reviews.  I’ve never done them but most art students live and die by them.  So having to review others work was hard at first.  I got used to it.  And now I can pen a song for anyone who’s looking for some marginally organized sheetwork.

The music production class was in my wheelhouse already.  I have a couple of DAWs and produced some tunes that you can find on my SoundCloud page.  But I did not fully understand the DAW stack as well as some of the fundamentals around music production and even synthesis.  So while I knew some stuff, this course filled gaps for other stuff.  The challenge here though was teaching others on what I’ve learned.  It was a different way of peer review, but it gave me a chance to show my chops, as well as do some video tutorials.  This class was so much fun.

So what was my takeaway for all of this?  I’m sitting here in September and reflecting on Coursera’s usefulness.  I liked that I rounded out my basic music production knowledge.  The songwriting class opened up new doors.  The audio and music engineering class kicked my ass.   So here’s some advice for others thinking about going down this route:

MOOCs can be fun and I’m glad they are around.  I’m not as hard up on them like some non American types but I think that’s because the MOOCs are being used to actually replace education not found overseas.  It’s all a part of the melting pot that we swim in online.  So if you can handle some language barriers, you should be good to go.  I know I am.  I’ll see you on the MOOCs!