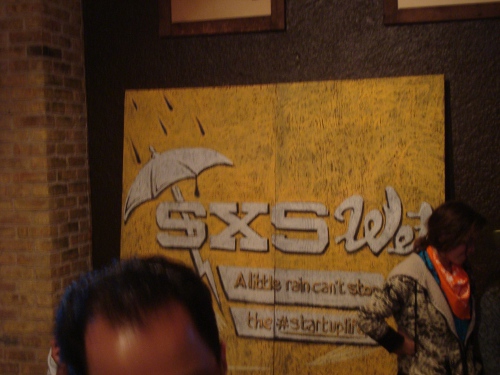 Yes, another wet day down here in Austin and I survived it.  This time around the buses ran on time and we actually ended up early to the convention center.  The rain came and went all day but it did not slow me down from catching some awesome panels.  Friday was more higher level talk in working and in design.  So Saturday I tried to hit up more technical workshops.  Some worked and some failed.  But I bounced where I needed to bounce and got some tasty amenities along the way.

So yes the bus ran on time.  I messed up and thought the all day events were actual sessions so we showed up a little too early in the morning.  It gave me time to get some coffee and hang out at Circus Mashimus.  The whole story behind that area are companies looking for API type work and even companies that provide API design for said API type work.  It was late opening up but I got in there for the bloody mary and skeeballed my way to a free T-Shirt (the count now is up to 4 or 5).  I learned something about Rovi, which is an EchoNest type service for music, audio, video, and any forms of entertainment/media.

But let’s get to the sessions and for now I will bullet point it due to DST:

So that was the panels.  Sunday, I see more Kinect and workshop type stuff so I’ll know I’ll be busy.  The parties Saturday night were off the chain.  I don’t even remember the happy hour.  The Interactive Opening Party was once again amazing, thanks to Frog Design and new co-sponsor Microsoft.  That party gets better every year.  We called it an early night due to DST and I’m glad we did.  We need to conserve out energy for the rough and tumble of music later on next week.  I know I’ll get better sleep tonight and I’ll be ready to rock out on a hopefully drier day Sunday.